construction of the Central Section from Reid Highway to Ellenbrook:  Beechboro Road North and Marshall Road, and interchanges at Hepburn Avenue, Gnangara Road and The Promenade at Ellenbrook.

Other flyovers will be built at Beechboro Road North and Marshall Road, with interchanges at Hepburn Avenue, Gnangara Road and The Promenade at Ellenbrook.

A Map of the planned future alignment of the Perth Darwin National Highway’s Swan Valley bypas. 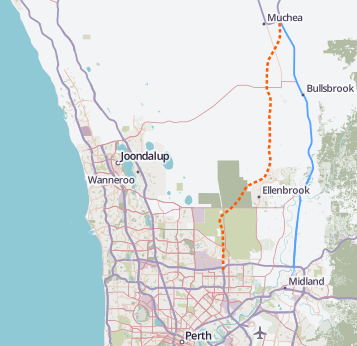 The new road will have grade separated interchanges at:

The state and federal governments have allocated funding to the project, with construction scheduled to started in 2016.

“Tonkin Highway provides a vital link for traffic movements to commercial and industrial areas across Perth,” the Minister said.

The Minister also announced a joint venture between BGC Contracting Pty Ltd and Laing O’Rourke Australia Construction Pvt Ltd – Great Northern Connect – as the preferred proponent for the next section between Reid Highway and Ellenbrook.  Construction was expected to start in early 2017.

“Travelling on the freight route from Kewdale to Muchea, NorthLink will potentially avoid up to 16 sets of traffic lights, one railway crossing and 21 speed limit changes,”