The technological innovations in the software industry have produced spectacular effects in almost all industries. They have bestowed capabilities on industries to create virtual products and to simulate various processes to study their performances. 3D rendering techniques are typical of such potential and are used extensively by many industries. Creative industries like construction industry reap the maximum benefits of these features.

The Basic Mechanism of 3D Rendering

3D rendering is the process of generating two dimensional pictures from a three dimensional model of an object using software programes. The visual information like shape, colour, lightning and texture of the model is stored in a data structure and processed by the rendering software to create realistic images.

The application of 3D rendering is wide spread in many industries including architecture, gaming, creation of movies and animation, manufacturing, and software.

Significance of 3D Rendering in Architecture

The most prominent use of 3D architectural model is in designing architecture and building information modeling. The wonderful photorealistic images and interactive animation have great significance in construction industry.

The unique advantages of 3D rendering in architecture are:

The designs created using 3D rendering provide clarity of minute visual details of building interiors and broad view of exteriors. They are picture-perfect replica of how the completed building will appear and covers all aspects of design.

Due to the clear view of all visual elements of the design, the architects can easily identify any errors in the design and apply relevant modifications. This ability to perform iterative planning of the design helps the planners to come up with immaculate design plans.

Apart from providing visual portrait of the building architecture, 3D rendering also offers the possibility of simulation of user interactions and study of the responses. This is a unique feature that is absent in the traditional visualization methods like manual drawings and sketches.

The powerful animation capabilities of 3D graphics can be used efficiently by building planners to test the seismic impact and influences caused by other natural calamities. They are also used to test the strength of the supporting structures. Thus, 3D renderings are great tools that not only enhance the artistic nature of the designs, but also their accountability.

The manual efforts of the architects are dramatically reduced by the use of 3D rendering methods. The scope for easy identification and rectification of the negative aspects of the design, easy and quick communication of the design to various teams and customers and the ability to incorporate the feedback of buyers in the design prior to the plan approval have caused remarkable improvements in the productivity of the architects. 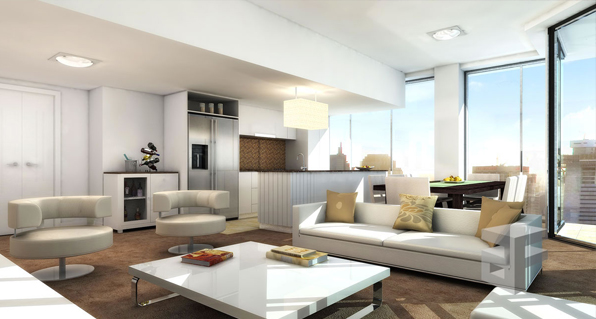 The designs prepared using 3D rendering can be easily communicated to the several teams of the development process due to their being in digital format. This is another unique feature of 3D rendering methods that makes them stand out from the manual drawings. Thus the design plans eliminate all possibilities of miscommunication of the design across multiple teams.

Enhanced Communication to the Customers

One of the main factors that affect the success of any business is effective communication of the products and services being offered to the customers. The photorealistic 3D graphics of the building design clearly depict even the micro details of the plan in a manner by which buyers can easily visualize and offer suggestions for customization. It improves customer relationship to a large extent.

As a result of minimized design and communication efforts, the development process is regulated. Due to the fact that all the modifications in design are agreed to between the architect and the buyer before the construction, the need for implementing any changes suggested by the customers at a later stage of the project is totally avoided. This shrinks the development time and reduces costs.

The showcase of beautiful designs of the project with 3D pictures of views from multiple angles boosts the business image. Apart from being finest tools for project communication, the brochures and flyers with 3D graphics also serve as a good branding strategy.

Another unique feature of the designs generated using 3D rendering, atypical of manually prepared plans, is that they give the opportunity to begin the marketing initiative even before the foundation of the building is laid. Due to the visual appeal, they draw more buyers in less time.

The tremendous changes caused by 3D rendering in architectural designing will continue to increase with the advancements in visualization technology. The virtual building plans designed by the architects have started to become the central reference for all the teams involved in the development.  Hence the working style of the entire industry will directly or indirectly be influenced by 3D rendering. As a result, the need to ensure coherence in communication of every modification in the plan is an important enabler for the success of 3D rendering.

The power of technology innovation in software arena is well-known for its vigor in breaking limitations.Thus 3D solution brings new hopes for its success in reducing the gaps between the virtual and real worlds.